Like a lot of people, I lead an exhausting life. I work full-time, go to school full-time (and will be beginning another Masters soon), own a small business, hold workshops throughout the state, mentor and coach two young professionals, teach at a local college and volunteer for two organizations.

But mainly, and most importantly, I'm a mom.

It snowed last night. So my office and my son's school were closed. It was an official Snow Day! Today would have been a great day to catch up on personal business work. You know, paying bills, planning out next week, catching up on emails, posting on Facebook, etc.

But it was a Snow Day. And my son was begging to go outside.

So I bundled up my boy in two shirts, a pair of pants, two pairs of socks, a scarf, a hat, a coat, shoes and a snow suit. Like Ralphie in A Christmas Story, he could barely move. But he played and played while I put a pot of chili on to cook. Soon, he had "played" so much that he ended up shoveling most of our driveway - for fun.

And then I got bundled up. And we played and played until our toes were numb and our noses red. It was cold and there were a ton of things I could have been doing. But on this day, there was only one thing that I really needed to do. And this was my reward. 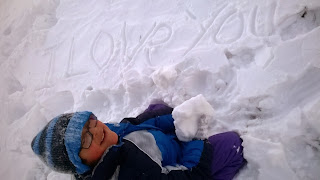 He's a pretty good artist, isn't he? My Sweet Boy.