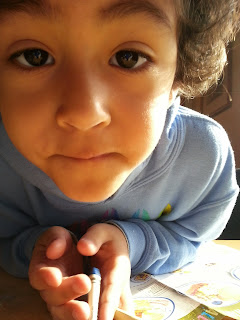 Yeah, him. That adorable little boy. His name is Alejandro. And he is my joy. And my everything. Yes, I know. That's what most parents say. And that's okay. I don't mind being another one of those parents regaling about how wonderful their kid is. Isn't that what it's supposed to be all about?

I'm a little worried about the shy part. I'm hoping that his shyness doesn't mean that he isn't assertive when he's in danger. You know what I mean - that he would be assertive if someone wasn't nice to him or worse, if someone was trying to hurt him. I always tell him to yell, kick, scream and run away if anyone tries to hurt him or make him go with them. And to find a mom, because moms have kids and really understand things like this.

Today, he desperately wanted to play outside in the snow. Since I chose to have a Snow Day yesterday, I really needed to focus on things today. I normally don't let him play alone outside.

We live near a very busy street. There are always people walking along the road, mainly transients. Just last week someone stole gifts we had placed outside for the guys who pick up our trash. During the summer, a SWAT team roared into our driveway in full gear, with canines, searching our yard for someone running from police after a theft. So, you can see that given what's happened in the past, there's a possibility of something happening to Alejandro. Of someone taking Alejandro. If he's outside alone.

But Alejandro really wanted to play outside. And I really needed to get my work done. So, he played outside. Alone. And I worked. And my mom watched him a bit through the window.

And he was just fine.

Soon, I will be leaving him for my very first vacation. It's a special trip that has the potential to change everything I know to be truth in my life. And it involves another Mr. Possibility. A very different kind of Mr. Possibility. But a very big possibility nonetheless. I can only hope he turns out to be as incredible (and safe) as Alejandro.
Posted by Unknown at 11:58 PM